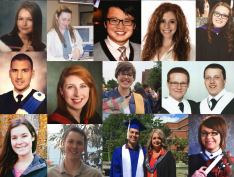 Kin Canada Bursaries, a program of the Hal Rogers Endowment Fund (HREF) is proud to
have disbursed bursaries to 1284 students across Canada since its inception in 1994.

This year, Kin Canada Bursaries awarded 70 $1000 bursaries to deserving students across Canada for their 2022-23 school year. Successful applicants were chosen based on their community
and school involvement, knowledge of Kin Canada and financial need. See the list of
recipients below.

The Hal Rogers Endowment Fund disburses a number of named bursaries in honour of people/organizations who have shown support for Kin Canada Bursaries through their financial commitment and or advocacy for the program.

The Diane Rogers Bursary for Excellence

The Kevin Denbok Bursary for Musical Studies, which was established at the 1987 National Convention to honour the
memory of Kevin Denbok, is available to persons wishing to pursue excellence in the field of music at a school of
music. In 1982, Kevin Denbok became the first person in the history of Kin to be made an honorary member of the
Association. Kevin, who suffered from cystic fibrosis, died on Nov. 24, 1986, at the Hospital for Sick Children in Toronto
approximately two weeks before his 22nd birthday. Kevin dedicated his life and his music to finding a cure or control for
cystic fibrosis and worked extensively with Kinsmen and Kinette clubs across Canada to raise funds for cystic fibrosis
research and treatment.

The Bob Pittman Bursary for Business Studies, which was established by the 1990-1991 National Board of Directors to
honour the memory of Bob Pittman, is available to persons wishing to pursue excellence in the field of business. In 1990,
Kin Bob Pittman, Past Governor of District 4, was made a life member of the Association. Bob dedicated his life and
career to striving for excellence through personal development.

The Ian F. McClure Bursary for Business Studies, which was established in 2019 to honour the contributions of Ian F.
McClure to the Hal Rogers Endowment Fund, is available to persons residing in Ontario wishing to pursue excellence in
the field of business. If there are no eligible business applicants in a year, applicants enrolled in a psychology program are
considered.Ian F. McClure was a life member of Kin Canada. He served as the Governor of District 8 in 1968-69. He was the
first Kinsmen to be president of Cystic Fibrosis Canada, where he served from 1976 to 1978. Ian F. McClure was also a
generous supporter of The Hal Rogers Endowment Fund.

First awarded in 2009, this bursary was named after the Winnipeg Kinsmen for reaching the $50,000 cumulative club donation level. The club initially requested the name include “Jackpot Bingo” to  recognize the source of the funds. The name of the bursary was changed in 2021 to recognize Colin Edwards' 40 years of dedicated service to the club. This bursary is awarded to the applicant submitted by the club. If there is no qualified submission from the club, then the bursary goes to the applicant from the nearest geographical location.

This bursary made possible by 10-year funding from the Kin Canada Foundation. First awarded in
2018, it will be awarded up to and including the year 2027. This bursary is in support of recipients with
a military or first responder background.

New this year, this bursary is awarded to the top-scoring applicant that is a parent or single parent, made possible by the Kinette Club of Calgary.