Early in May 2016, a wildfire of unknown origin broke out in the Regional Municipality of Wood Buffalo in northwest Alberta, close to the city of Fort McMurray. In less than two days, the fire encroached upon Fort McMurray itself, resulting in the evacuation of the entire population of the city and the work camps and oil sands plants north of the city – a total of more than 94,000 people – to communities elsewhere in northern, central and southern Alberta. At its peak, the wildfire had consumed almost 590,000 hectares of tinder-dry boreal forest in Alberta and Saskatchewan, making it the largest and most expensive natural disaster in recorded Canadian history. 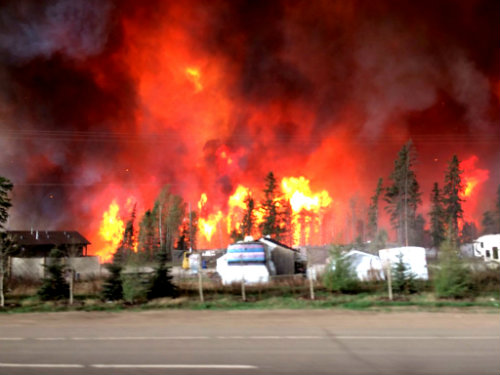 In characteristic fashion, our clubs leapt into action, raising and donating funds to the Kin Canada National Disaster Fund, Kin Canada Foundation, District Four Foundation, Canadian Red Cross and the United Way of the Wood Buffalo Region as well as many other human service and community organizations. In addition, many Kinsmen, Kinette and Kin Clubs throughout Alberta participated in the relief effort, supporting Wood Buffalo residents who were temporarily relocated to large evacuation centres in Lac La Biche, Edmonton, Calgary and several other communities across the province.

Kin members were active in providing meals, blankets, clothing, toys and comfort for those who were relocated without any reasonable idea of when they might be able to find their way back to their homes – if, indeed, their homes still existed (more than 2,400 structures, including many homes, were completely destroyed in the blaze; several of those homes were owned or rented by Kin members).

Among the Kin members and former members who found themselves being forced to evacuate their home in the face of the wildfire were Past National Presidents Roger Hebblethwaite and Diane Shannon. PNP Diane is the Executive Director of the United Way of Fort McMurray, and as such was tasked with the responsibility of assisting in the development of a plan for supporting Wood Buffalo residents while they were in evacuee centres and as they were allowed to return to their homes. The challenge for Diane was that she had to do it from unfamiliar office space that was kindly supplied to her by the United Way of the Alberta Capital Region in Edmonton – certainly a major logistical adventure for all involved!

Almost as soon as it became clear that the wildfire was going to have a devastating effect in the Wood Buffalo region, and in Fort McMurray in particular, a small group of Kin members, friends and associates, led by Kinsmen Club of Stampede City member, Sean Libin, started organizing a fundraiser through an outdoor concert at Commonwealth Stadium in Edmonton. In less than a month, Kin Sean and his team assembled a lineup of Canadian musicians and performers that would provide an eclectic range of entertainment for nearly 40,000 happy music fans. The lineup featured 17 acts on two stages over a six-hour period, including Nickelback, Blue Rodeo, City and Colour, Randy Bachman, Ian Tyson and The Rankins. The concert raised more than $2 million for the United Way of Fort McMurray to help with the resettlement efforts for displaced and disadvantaged Wood Buffalo residents.

One person who became somewhat of a “celebrity” as the story of the Wood Buffalo wildfire unfolded is Regional Chief of Fireand Emergency Services Darby Allen. Chief Allen became the face of the team fighting to save the city of Fort McMurray and surrounding communities from the devastation wrought by the wildfire. He was also responsible for providing daily updates on the progress of the firefighting effort. He was lauded as a “hero” for his work in leading the firefighting and emergency crews, although, in his characteristically humble manner, he shifted the hero designation to the more than 200 men and women who were engaged in the daily effort to save Fort McMurray and surrounding communities. 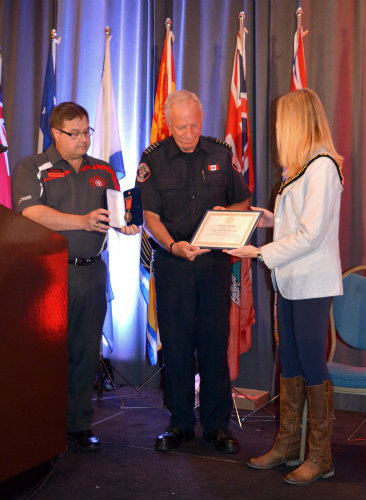 At Kin Canada’s 2016 National Convention in Edmonton, Chief Allen was honoured with a Hal Rogers Fellow (HRF) by Past National President Sean Thompson, who currently serves as the Chair of the Board of Directors of  the Kin Canada Foundation. The HRF is the highest honour conferred by the Kin Canada Foundation. Previous HRFs include former Governor General Michaëlle Jean, singer Céline Dion, former hockey star Wayne Gretzky, and retired Chief of Canadian Defence Staff, General Rick Hillier. In typical fashion, Chief Allen accepted the HRF with humility, deferring the credit for the extraordinary work done in Wood Buffalo and Fort McMurray to

"The real heroes...the firefighters, emergency services personnel that are currently on the ground. They’re the people that should be getting all the kudos."

Kin Canada salutes Chief Darby Allen, PNP Diane Shannon, and every other person, whether a Kin member or not, who participated, either to raise funds, distribute relief supplies, or in any way provide assistance, support or protection to those affected by the wildfire of the summer of 2016.

It was a truly Canadian effort, of which we should all be very proud.