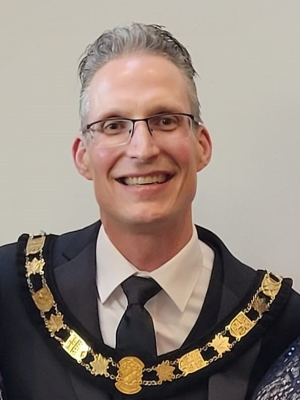 We are pleased to announce that Cameron Kemp of Medicine Hat was named the 103rd National President of Kin Canada at our recent National Convention in Hamilton, Ontario (where Kin Canada was founded in 1920).  Cameron is well known locally for his dedication to Medicine Hat and the surrounding communities through his volunteer and service contributions.  A proud member of The Kinsmen Club of Medicine Hat since 2005, Cameron is honoured to have the opportunity to lead our National Board of Directors and promote our Association (which raised over $25.9 million dollars last year!)

Born and raised "Hatter", Cameron is the youngest twin son of Dr. Raymond and Georgia-Jean Kemp.  His first interactions with Kin Canada were through Kin-sponsored community programs and capital projects.  “My father taught my brother and I to skate during the FREE public skating that our local club has sponsored since 1984.  My mother also took us to The Kinsmen Club of Medicine Hat Children’s Library, where we spent time reading and participating in their various children’s programs. We also learned to play T-ball and toboggan in Kin Coulee Park.  Like so many other young people in our community, Kin played a key role in my development.  I am thrilled to be a member of The Kinsmen Club of Medicine Hat and to be able to give back and help create opportunities in our community for others,” shares Cameron.

Since joining Kin in 2005, Cameron has remained a highly active and motivated member in The Kinsmen Club of Medicine Hat, as well as all other levels of the Association.  He has served in many club leadership roles, including as Club President in 2012-2013, has chaired numerous Club fundraisers and service projects, and has sponsored over 30 new members.

Cameron has also contributed greatly to the Association at the District level, which represents all Kinsmen, Kinette, and Kin clubs across Alberta and northern British Columbia (District 4).  He has previously been awarded the National Outstanding Deputy Governor Award for his leadership of the Zone, and he held the positions of District Risk Manager, District Membership Director, and District Service Director when on 3 occasions, District 4 has won the Outstanding District Award.

Cameron brings a diversity of knowledge, skills, and experience to the National President role, which he honed when he served on the Board of the Kin Canada Foundation before being elected as a Director on Kin Canada’s National Board (NBOD) from 2018 to 2021 and elected as National Vice President of Kin Canada for the 2021-2022 year.

As part of his “Be a SPARK!” campaign, Cameron looks forward to engaging with Kin Canada’s membership and watching clubs make an impact in their communities all across the country.  “Everyone in our Association has a SPARK – something unique they bring that adds tremendous value to their community, club, and Kin Canada as a whole.  I look forward to using my SPARK to lead others, engage with our membership, and help introduce Kin to more communities from coast to coast,” says Cameron.

Fellow District 4 Kin member and Past National President Terri MacCannell has seen firsthand why Cameron is well-suited for the role of Kin Canada National President. “Cameron is a passionate and dedicated Kinsmen, always there to lend a helping hand in his community. As the National President of Kin Canada, Cameron will continue to inspire our members with his authenticity, confidence, influence, and leadership. He is the spark that will guide our association forward,” says Terri.

As the national face of Kin Canada, Cameron will attend functions such as new club charter nights, life membership ceremonies, and conventions.  He will also focus on building relationships with municipal, provincial and federal leaders to discuss the value of volunteerism and service club membership within our communities.  “Municipal engagement drives the success of all service clubs and creates win-win opportunities that ultimately help make Canadian towns and cities better places to live, work and play.  Service clubs can add tremendous value to communities, and I hope to see more places across Canada benefit from the dedication of Kin volunteers,” he says.

Seeing how Kin Canada’s membership has contributed to his own development over the years, Cameron also looks forward to seeking opportunities to connect with students at post-secondary institutions, be it universities, colleges, and technical, vocational or trade schools.  He hopes to highlight to students the personal and professional benefits of joining or chartering a Kin Club in their community, especially as they start their careers, build their networks, and explore their strengths and interests.

In Cameron’s personal life, he operates a successful law office on the skirts of Medicine Hat’s historical downtown that focuses on real estate, estate planning, estate administration, business law, and civil litigation.  As a passionate collector of Kin Canada memorabilia and a knack for winning all awards related to Kin history, it is fitting that he would choose to set up shop in a historical house built in 1903.

In addition, Cameron is a very active member of the Crossfit community, often attending classes six days per week.  He looks forward to visiting Crossfit gyms across Canada as he tours as Kin Canada’s National President.