As mentioned in the previous blog post, there is more to the Milk for Britain story – this is the continuation. If you haven't yet done so, read Part 1: A Canadian Response.

The success of Kinsmen’s Milk-for-Britain project was in part due to the close relationship that developed with the Women’s Voluntary Services (WVS) of Britain, which distributed the milk in the United Kingdom. Kinsmen was the sole provider of milk throughout the war, according to WVS official Elsa Dunbar, C.B.E.

Lady Stella Reading was the founder and chairperson of what was eventually renamed the Women’s Royal Voluntary Service. It still exists today. In 1958, Stella Reading was created a life peer, becoming Baroness Swanborough. She was also the first woman to take her seat in the House of Lords. 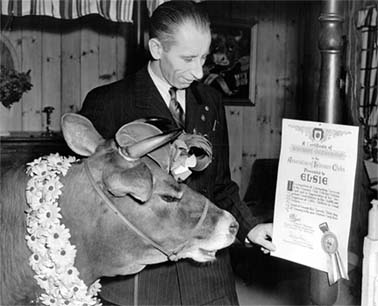 The WVS members recycled the Kinsmen Milk-for-Britain powdered milk containers and used them to transport hot meals to their disadvantaged neighbours. This was the beginning of a global nutrition program for senior citizens that we now know as “Meals on Wheels.”

The Milk-for-Britain project also relied heavily on the bravery of the Merchant Marines, who delivered the carloads of powdered milk that regularly arrived at Halifax harbour. The marine convoys that crossed the Atlantic to the British Iles, defended in part by the Royal Canadian Navy, became a life-saving umbilical cord, keeping Britain alive in its “darkest hour.”

In recognition of the key role he played in the campaign, Mr. Rogers was made an Officer of the Civil Division of the Most Excellent Order of the British Empire by King George VI in 1946. Nearly 30 years later, Mr. Rogers was also invested as an officer in the Order of Canada.

Was the Kinsmen “Milk-for-Britain” campaign a miracle? Anyone, who has heard the entire account of the behind-the-scenes work and negotiations it took to acquire and transport more than 50 million quarts of powdered milk, is hard pressed to call it anything else. At least twice, the Milk-for-Britain project looked like it would end due to shortages of powdered milk on the home front. However, each time Mr. Rogers showed great ingenuity and found a way to keep the supply of powdered milk flowing. Moreover, only three shipments were lost on their way to Britain. One was recovered by divers, and after a quick reapplying of labels, was sent back on its way. The other two were lost, but fortunately, were covered by insurance. 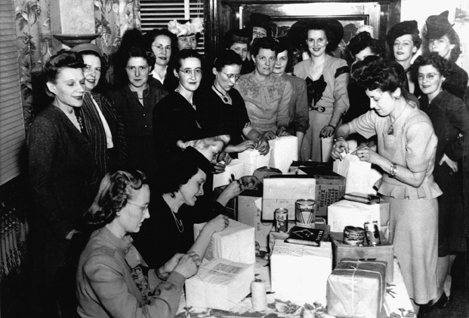 It's also a remarkable story because of the vital role that women played in the fund-raising campaign, paving the way for the all-male Kinsmen Clubs of Canada to become the co-ed Kinsmen & Kinette Clubs of Canada.

One of the reasons for the success of this project was a powerful poster showing the bandaged head of a little boy with dirt-smudged cheeks and tears rolling down them. The caption read: “Daddy, I want a drink of milk.” Here was a picture that was worth not a thousand words, but 50 million quarts of milk.  In 1999, it was discovered that the boy who had been the artist’s model for the poster grew up to become a Kinsman himself. (In fact, he actually served as Kinsmen’s executive director for a period of time in the 1970s.) This gentleman, Peter Hanley, attended the Kinsmen association’s 1999 National Convention where he told the story of how as a youngster living in Vancouver he had been dressed up with a bandage and had his cheeks smudged with dirt to pose for the poster.

When the need in Britain for milk ended, the Kinsmen kicked off a companion project, called the Kinsmen “Food-for-Britain” Campaign, which concluded on July 20, 1948 with the symbolic distribution of 200 food parcels by the Lord Mayor of London. In total, 36,000 food parcels were sent.

Undoubtedly, the twin Milk-for-Britain and Food-for-Britain campaigns marshaled the active participation of more Canadians than any other national war-time effort. The nearly $3 million raised between 1941 and 1948 from the Canadian public involved a wide array of fund-raising projects. Much of the money was collected in nickels and dimes using small milk bottles, featuring the face of the Milk-for-Britain poster boy, that were placed on counters in banks and stores. 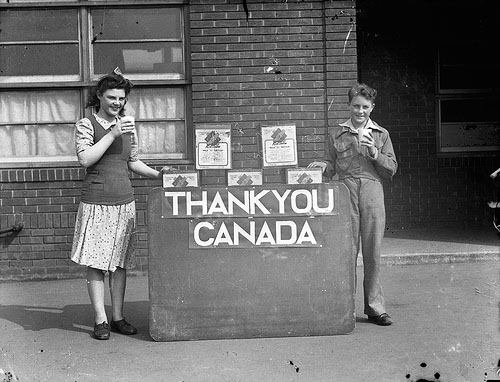 Other projects showed great innovation. For example, the 27 members of the Halifax club spent their spare time building a house, and when it was constructed, painted, and the grounds landscaped, they raffled it off and sent $30,000 to the Milk-for-Britain fund.

Some of the clubs did a truly phenomenal job of raising money for the milk fund. In the first three years of the appeal, the Winnipeg Kinsmen (the largest club with 108 members) contributed a total of more than $168,000 to Milk-for-Britain.

The full story of the Kinsmen Milk-for-Britain project has never been told. In fact, it is a forgotten story both in Canada and in Britain, lost in the passage of time. However, it is a remarkable tale of how a small group of Canadian service club members defied Hitler’s threat to malnourish Britain’s children.

Learnography (formerly Curriculum Services Canada) has accepted the opportunity to produce a 10-minute documentary and accompanying study guide to commemorate the 75th Anniversary of the Milk for Britain Campaign. Our clubs donated over $50,000 to cover the cost of this project. Learnography brings an educator’s perspective with their ‘Seal of Approval’ for teachers to use in the Canadian Curriculum of Studies.

If you have any questions or comments regarding the documentary and our efforts in raising awareness across Canada, contact us today.